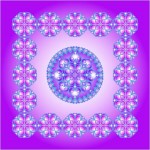 Heart Galaxy design for pillow, 1 of 5 from set

Deep in space, beyond the Banana Galaxy and to the left of the Triangle Galaxy, the Heart Galaxy glows like a valentine of pink and purple stars. At the center of this galaxy lies the HeartGarden solar system, where Planet Heart orbits around a warm Heart Sun.
Planet Heart is made of millions of gorgeous hearts.
At night on Planet Heart, you can see trillions of HeartStars in flower constellations sparkling in the sky. The stars seem to sway toward each other, like flowers dancing in the wind.
In the morning when the Heart Sun rises, each heart on Planet Heart shines and glitters as if it were brand-new.
One morning on Planet Heart, LOVELLE the gardener was looking for a new friend. Lovelle liked to help Earth children by bringing them to Planet Heart and teaching them how to make their world more beautiful.
“Good morning, KESEMODO!” Lovelle said as she heartmarked hello with a very young heartling made of burgundy hearts.
“You are just in time to dip your magic wand into the Shingriver that flows through the garden, Kesemodo,”said Lovelle. “Only your wand can capture a bubble pure enough to hold children from Earth.”
“I’ll show you who needs help right away!” Kesemodo said. He was a master at juggling heart bubbles.
“They don’t call me ‘shower magician’ for nothing,” he added, and pulled out his magic wand.
“Which new friend needs a new heartune?” Kesemodo sang
Soon the image of a young girl appeared in the water bubble. But Kesemodo frowned.
“She seems to be crying. I wonder why?”
“Who do you see?” asked Lovelle, impatient. “Is it a boy or a girl? Is she unhappy? Ooh, I want to heartoose her to me!”
Lovelle begged to look through the heartbubble, but just at that moment, the flamboyant bird MICAPELO and his large feather-hat flew right in front of her face!
“Oh, Micapelo, you nearly popped the bubble!” said Lovelle, brushing the feather-hat away. Then she looked again, and finally saw her new friend.
“She is crying, Kesemodo! I wonder what’s wrong?” Lovelle said. But Kesemodo the water master just shook his head.
“I can only show her to you,” he told Lovelle. “Finding out what’s wrong is a job for you and your friends.”
***
In Woodland Hills, Minnesota, TALINA was crying into her pillow when Lovelle heartoosed her into Planet Heart.
Earlier that morning, Talina had wanted to help her father shovel snow.
“Can I shovel, too?” she asked, dragging her child-size snow shovel behind her. Her father looked at the tall drifts of snow, then at Talina.
“Why don’t you go make a snowman?” he said, smiling, and went back to work.
Later, Talina’s mother was hanging holiday lights.
“Can I hang lights, too? Talina offered. Her mother looked up at the tall ladder, then down at Talina.
“Better go play inside,” her mother suggested.
When Talina went inside, she saw her brother folding the laundry.
“Can I fold laundry, too?” she asked.
He looked at the white mound of laundry and smiled.
“Go fold your doll’s dresses, little sister.”
At this, Talina ran to her room in tears.
“I wish I was strong enough, tall enough, and old enough to help,” she sobbed. Her tears soaked her pillow until it was quite wet.
Lovelle observed all this from Kesemodo’s heart bubble. She understood Talina’s wish to help, because Lovelle loved to help, too.
“Now, with a few heartsparkles and my heartpowers,” Lovelle said, “I can reach Talina through her tears. She must come to Planet Heart and cheer up!”

“Everyone is good at something, everyone needs some help,
What you can I need, what you need I can,
So let’s join hands, join hands
And heartmark as we dance.”

At the end of the party, Lovelle gave Talina three special crayons to represent the new experiences.
“The pink crayon,” she said, “is to remember that some people are afraid of asking for help.” Talina nodded, thinking about Menderlieb’s factory.
“The green crayon,” Lovelle continued, “is to remember that everyone can help in ways large and small.” Talina smiled, remembering Menderlieb’s pile of seeds transformed into beautiful necklaces.
“The red crayon,” Lovelle said, “is for the warm feeling you get when you are needed.” Talina laughed softly, feeling a tingle from her head to her toes. She was warm all over, and a little sleepy. She yawned and rubbed her eyes.
Then Lovelle gave the pink, green and red crayons to all the other Heartgarden friends, who had learned these lessons as well.
Lovelle took Talina to the Heart Bubble that would carry the young girl back to Earth. All her Heartgarden friends waved goodbye as Talina lifted off on her silent, soft flight. On the way, Talina looked back at Planet Heart. It glowed pink and purple, deep in the Heart Galaxy.
Before long Talina landed back in her bed in Woodland Hills, Minnesota. As she drifted off to sleep, Talina thought about all the new Heart Character friends that she had made. She realized that each one had helped her in his or her way. Thinking about her new friends, she fell into a deep and refreshing sleep, still holding her new heartseed necklace that she had helped string with Menderlieb.