By Tali Lehavi on June 9, 2011 in Parenting, Uncategorized

The insight symbol in the center of Planet Heart to remind all to listen to their own insight and inner voice, available for licensing from Planet Heart

The inner voice that used to keep us in line is being replaced by a new form of parental guidance: the public’s eye. This is a false guide to rely on, but it is the new parent that keeps everyone from celebrities to reality stars to politicians to private citizens in check. I will call the new public eye parent: Medior. It’s an invisible, intangible creature that exists thanks to the media. The people who perceive this Medior as their parent suffer from a new pathology.

In the good old days, we all had real parents who we listened to. Even when they weren’t there to tell us to keep our pants on, we could hear them say it to us, so we kept ourselves in check. Unfortunately, we no longer have an inner voice. We narrate publically. We post on Facebook, or other social media, if we’re not celebrities. We let the invisible readers out there comment or not comment, and that is as far as our actions get checked.

Celebrities do the same thing. They act out in tantrums and hope that the readers of OK magazine will be their parents. … Do they think we can actually help them? We cannot help. We’re not their parents. But they don’t realize that they are acting in this way in search of us to be their parents. They’re just behaving like children who are out of control. But they are not children. They are suffering from an undiagnosed case of Medior.

Just to be clear—the media eye, “Medior,” is different from a real parent. A real parent is strong and firm and loving. The most out of control child still wants the real parent to remain this way. A real parent provides children with confidence in themselves and in the parent. Children, even in the midst of a tantrum, still care to heed a real parent. Medior is a collective of voyeurs who pass judgment and praise which you can dismiss if it makes you uncomfortable.

The newest scandal is no different than previous weeks’ headlines. A politician sends photos of his private parts. Where was his inner voice? Where is his mother? Doesn’t he realize that he should be responsible? A grown up may experience strange impulses, especially during stressful years, but there is never a good excuse to act on them. Midlife crisis shmisis—you are not supposed to give in to crazy urges.

Medior should be a new pathology that’s classified in the Diagnostic and Statistical Manual of Mental Disorders (DSM). I am afraid many people suffer from it to some degree as they post a tweet like a confession of what they just did wrong and think the confession will set them free. It’s time to get back to the inner voice, to be more like our parents’ parents, and be a bit more judgmental on ourselves. And I am an artist who is against passing judgments to the core. Then again, I do believe in lines of right versus wrong and following rules that keep us from hurting ourselves and others.

I am begging all people who think they deserve a break from rules and lines to pretend their parent just scolded them or gave them a major time out until the urge is gone.

If you are an adult and you think you suffer from Medior, please seek help from yourself, real people, and professional support if necessary. Medior is a condition that I am the first to identify and name, so it is not yet diagnosable by other psychologists. I do have a BA in psychology, and I do encourage the world to add this condition to DSM.

I HeartMark all those who add value to give guidance to others as opposed to airing out their dirty laundry on social sites! 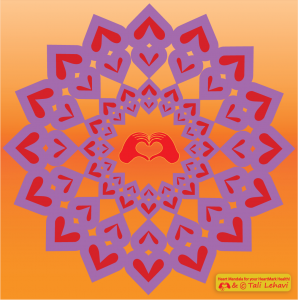 Tali's trademark HeartMark gesture inside a mandala to help you focus on your real values!