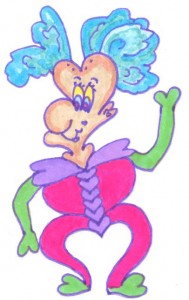 Kesemodo,(TM) the Shower Magician, as I first drew him ever, with one hand up

Kesemodo uses this HeartStar wand to make water bubbles for juggling, to see and help earth children, and for his magic tricks!

I found this old entry from 7.1.1998, at 4:45 pm!!! It is a section in which I think to myself and brainstorm by writing my thoughts. I tend to review ideas this way at the same time. It is one of the methods I use to generate ideas. The marketable results from a section like this could take on many forms, such as a description of the Heartlings and HeartFlowers in marketing materials, or an intriguing blog question asking people if they feel there is a secret code between the HeartFlowers and the water drops, or a toy product description… Instead, I want to show here the scratch work that drives the creative process. I am just pasting it as is: (All the material is already registered at the copyright office.) Here is the original excerpt:

All the characters in Planet Heart love water drops of all forms. They love the rain, and they love the sea, and they love taking showers! They also love to go swimming and to play in puddles. It seems pretty obvious, since water is fun! But what none of the heart characters know is that the all the water drops are a special code. No one understands what the purpose of the code is. Only recently a few scientists have been able to recognize, under powerful heartscopes, that the heardrops are made up of tiny heardesigns which fit together in neat organizations. They have also noticed that some of the heartdrops’ designs match the flowers’ designs.
There really is no mystery about any of this in my mind. I am trying to find a creative way to relate it.
Everything in planet heart is made up of the hearts. All the hearts combine in various combinations. The combinations are limitless. Everything in Planet Heart, and above it, has these combinations. Obviously, they are all related and they match in some form. There is a useful purpose and a logic to the fitting and to the forms. Whether or not the combinations are a form of communication between the waterdrops and the flowers is up to others to imagine. No one can predict the shapes of the designs. The code exists, but does it really code for anything beyond the obvious? I obviously don’t believe so, but I enjoy letting others wonder about it, because imagining such things and coming up with possible images or answers is fun. )

I wrote this entry before I actually invented the Heart Pictionary. By now, the visual dictionary is a complete language that is completely made of hearts. Thanks to this original idea of a secret code, I continued to actually write a secret code! Not only do the Heartlings, HeartFlowers, Heart Waterdrops, and all other items on Planet Heart send positive messages through their words, actions, and positive intentions, but now the hearts that form them are an actual pictionary of positive character education words. I hoped that children who get really into Planet Heart will have an added level of conscious and subconscious positive direction in life. It was something I intended to patent, but I will make it my trademark style because that’s cheaper and lasts longer legally.

The entry from 1998 is on a page of rhymes which I wrote before and after the entry. It follows directly the part in which I describe the HeartFlowers that can hang inside a shower and have matching shower curtains. Then I wrote matching hand clapping choreography rhymes for doing in the shower to the Heartlings and HeartFlowers. Pure clean water was valuable to Planet Heart.

Because I had limited technology and abilities, I laminated each illustration. This allowed me to actually see them as a shower toy. One idea always leads to another in this creative process.

I love the creation process. I love to see how one idea leads to another. When you allow the right hemisphere enough freedom, it can help you produce a great product. Here is the chain reaction of ideas that led to the Heart Pictionary:

First I drew freely. I wanted to protect and get versatility and more ideas out of my work, so I laminated each drawing. (I didn’t have computer programs to scan and manipulate.)
I kept a journal of values that matter to me, and clean water seemed like a valuable resource. Later that idea went into a Planet Heart that is dedicated to a healthy environment.
I invented Kesemodo from free style drawing images made of hearts. He became the water expert who makes up rhymes in the shower, and later does magic tricks that go wrong if the water is tainted.
Then I laminated the drawings and saw they’ll make a great toy in the shower as they are.
Then I noticed all my drawings of water drops have the same mandala style as the flowers.
Then I noticed the important relationship between flowers and water.
Then I thought it would be intriguing if there were a secret code.
Then I thought of trying to protect the drawing style as a trademark style.
Then I turned the designs into an actual language.
I created lessons for character education using this heart Pictionary.
Once I had all the ideas, I knew how to package each of them. I formed a bible that describes each Heartling.
Kesemodo got the nickname “Shower Magician” Kesemodo because I liked that name and it seemed great for marketing water toys. He was the official juggler of water drops who make rhymes and magic. If the water is not pure, the magic has “unexpected results.” He can also read water bubbles to see if earth children need help.

Brainstorming ideas does not cost you money. I recommend it for everyone because it’s satisfying.

On the other hand, marketing ideas is much more challenging. I am still not sure what the “secret code” on that is.