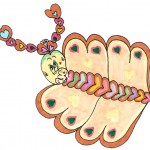 When BUTTERHEART BETTY was very young, she did not have friends. She saw other butterflies flittering in the garden. They hopped over each other from flower to flower. It seemed like a very enjoyable game! Could Butterheart Betty join them? Betty did not know how to ask them. She felt left out, so she left the garden.

“If only I could find a friend to play with!” Butterheart Betty wished. She sat on a leaf floating in the middle of a river, and sighed. Two fish pushed her leaf to the right, then left. Then the fish umpire, the one with the orange head, declared the blue fish the winner. The green fish said it was a tie. Butterheart Betty knew it was a tie, because she saw it from above. But she was too shy to speak up. The three fish continued to argue, and she had to fly away so that she won’t get wet!

She flew further than she’s ever been away from the garden, until she reached the forest. She sat underneath a HeartThrob Tree.  That’s the tree whose seeds only stop bouncing after you say an ultimate truth. At that point, a little HeartThrob comes out and spreads good feelings by saying true compliments. Butterheart Betty did not know anything about the HeartThrob tree, because she was still so young. She was also too shy to speak to the three HeartThrobs who were buzzing good compliments around a young monkey. Instead, she sobbed, “I am so shy that no one wants to play with me!” The HeartThrob Seeds did not think that was true, so no seed stopped bouncing for her. Instead, a seed fell on her head. When it did, it just kept bouncing and rolling off. She picked it up, and flew on.

Butterheart Betty felt very tired of not having any friends. “Everyone in the garden, in the barn, in the river, and in the forest seemed to have fun together. How did they start being friends with each other?” she wondered.

Butterheart Betty rested on a rock along a major heartpath to Lovelle’s Garden. A group of squirrels were playing “hot and cold hide and seek” with seeds. A brown-spotted squirrel hid a seed, and other squirrels had to find it based on “hot” and “cold” clues. The closer the other squirrels came to finding the seed, the “hotter” the brown-spotted squirrel yelled. Then a bird flew by, gestured a shape of a heart with one of its wings, which met with a similar mark with a hand of one of the squirrels. And then the bird joined the game! Could this work for Butterheart Betty, too?

Butterheart Betty was supposed to look for the HeartThrob seed but she was so excited that she finally figured out how to become friends with the squirrels, that she asked them for time out. “I have been too shy to talk to the cows, the fish, the HeartThrobs, and the monkey. I am so glad that I can finally be friends with you!” she explained.

The brown-spotted squirrel agreed that was too many friends that she was too shy to befriend! He reminded her two things about the HeartMark: “First, the first step to any relationship is just having friendly intentions. Second, the HeartMark only helps those who are friendly to begin with.” As soon as he said this, the HeartThrob seed, which bounced right out of its hiding spot, jumped onto his shoulder, and turned into a red-headed HeartThrob!

Do you mind if I come back to play with you another day? Butterheart Betty asked the squirrels. “I want to go back to the fish, and help them solve their argument! Now that I know how to make friends, I can also be helpful!”

The squirrels understood. They HeartMarked Butterheart Betty one last time for a good-heart-bye. The red-headed HeartThrob joined Betty on her trip to visit the fish. He could tell she would enjoy having someone to talk to! They flew into the sunset and stopped to HeartMark every Heart Character on their way. Betty had a very long day that day. Ever since, she has always had many good friends, and no problem making new ones!

Heart names in the story come from the following languages: