Everybody does it. The amount of peer pressure is enormous. They all seem so friendly and with good intentions. “Just a little bit won’t hurt,” they say.
You come prepared to the birthday parties, arming them with healthy food before they leave the house. At least you know what’s coming. But then others attack where you’re least prepared–the piano teacher, the star of the week, which is weekly, and worse of all—the ballet teacher. They all offer junk food.
The stress on the parent is enormous. It is worth examining. The parent wants to say no, but wants to appear normal. If the parent appears too rigid, the child may rebel and eat junk secretly. The child wants to be happy. And the parent wants the child to be happy. Instead of a happy child, the parent finds themselves on the threshold of another battle that can lead to a breakdown. It’s almost safer to say yes rather than to say no, have a meldown, and then have no choice but to say no. And what parent wants their child to be unhappy?
But the lifelong damages that result are so much worse. Many people miss the connection. They read in the paper that heart problems kill Americans. And their doctors tell them to eat healthy. The dentists tell them to stay away from very specific foods. And then they go and see everybody else doing it and they ignore the doctors. When they get old and sick, they forget the connection.
Most people term junk foods “treats” instead of ‘poisons’ and insidious killers. They teach their children by example to not say no to junk because everybody else is doing it. It’s a dangerous mentality. It’s time to make the connection between our words choices for unhealthy food and how we treat it. It is time to make that connection between saying no to poisonous junk food and saying no to drugs.
The next time you are offered junk food for your children, think of the messages about drugs. Say NO! Say it politely, because most people don’t realize how dangerous their offer is. Remember that you are an example for your children. Teach them to say no to junk food now, even if everybody else is doing it. Everybody really is doing it, but these are the same everybody’s that you read about who later get heart disease and wonder why.
Teach your children to think for themselves. This is so tough. I use every strategy I can. Capturing their attention span between computer time and their other activities is difficult. I started to send emails with advice about life even to my six year old. I ask them to not want to be like everybody else when it comes to bad health. I remind them of the gift that good health is. They have one body that they have to take care of for the rest of their life, and that’s it. I inspire them to be leaders to help others eat healthy, too. I show them how cheap junk food is and compare it to the expense of healthy food. This is just a few of the tricks. It takes hundreds of attempts to fight this war on junk.
Teach your children to read labels. Teach your children about their body. They should listen to their hunger and listen to the cravings and the imbalances. They need a good health vocabulary so they can understand more. The amount of lessons here is enormous. But it is priceless. We cannot take care of our body if we don’t study it. I’ll leave that for another blog entry.
Say NO to junk food. It is a poison! Again, remember that the skill to say no to drugs is first learned when you or your child are confronting other bad habits that others do and you are tempted to imitate them when you know that you shouldn’t. So say no to imitating them, even if it seems like it’s okay since everybody else is doing it. 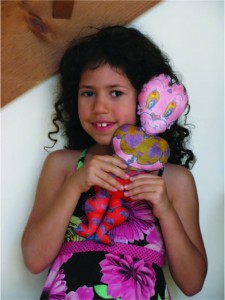 Buy the first doll ever to do the trademark heart hand gesture!

Lovelle sends a big HeartMark to remind everyone that the Power of Infinite Goodness is Inside Them!